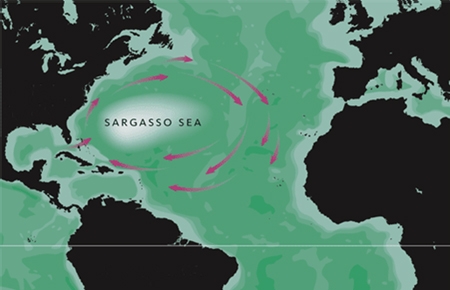 Earlier this year I wrote an article for the AAAS publication Science Diplomacy on the innovative approach taken by the Sargasso Sea Alliance to establish better stewardship mechanisms for the planet’s high seas:

http://www.sciencediplomacy.org/letter-field/2014/protecting-sargasso-sea …… Article:  As founding chair of the Sargasso Sea Alliance I was pleased and gratified to participate in an historic event for ocean conservation in Hamilton Bermuda on March 11.    On that occasion representatives of many national governments and non governmental organizations across the globe gathered in support of improved stewardship and sustainability for increasingly beleaguered oceans.  The Hamilton Declaration for the Conservation of the Sargasso Sea  was adopted by countries representing more than 300,000 linear kilometers of coastline.  Adoption of the Hamilton declaration reflects an important application of science and diplomacy to stewardship of the planet’s vast “high seas” in the context of perilous trends in the health of ocean ecosystems that play a vital role in sustaining life on Earth.

My involvement in work that led to the Hamilton declaration began on an expedition to the Galapagos Islands in 2010.  That expedition was designed to address a wide range of ocean sustainability issues.  My decision to join the expedition was based on a lifetime of environmental appreciation and stewardship including several years of government service with responsibilities for natural resource agencies and programs.  Living on the Atlantic coast I feel the ocean’s presence almost daily and have traveled to spectacular oceans reefs and seascapes around the world.  For many years my concern about ocean stewardship has escalated in the face of increasing evidence that key indicators of ocean health are declining.  As a presidential appointee to the National Park Foundation I have had the opportunity to get a better understanding of health issues facing ocean areas within US federal government jurisdiction.

The Galapagos expedition created an ideal opportunity to discuss ocean stewardship strategies with well-informed and like-minded people in an inspirational setting.   By the time we departed the Galapagos Islands a core group of  individuals and organizations has formed around the idea of a bold initiative to create an historic conservation framework for high seas, focused on an iconic region of the North Atlantic known as the Sargasso Sea.

The creation and adoption of the Hamilton Declaration several years after the Galapagos expedition is a tribute to the thoughtful and committed work of  a multination consortium of interested parties over nearly four years.   Supported largely via private philanthropy, the Alliance worked with distinguished scientists and other resources to assess, via peer reviewed studies, the ecological and biological importance of the Sargasso Sea using criteria developed by the Convention on Biological Diversity in 2008.  These criteria include:

This process demonstrated the importance of the Sargasso Sea, it’s worthiness for protection, and served as the scientific foundation for developing an appropriate stewardship plan.   The scientific case was widely distributed and discussed among interested parties.

A legal working group, composed of international experts on marine and terrestrial protection matters, explored a wide range of mechanisms that might be appropriate to the unique circumstances of areas, such as the Sargasso Sea, which lie beyond any  national legal jurisdiction.  Marine protected areas have become increasingly common within the exclusive economic zones (EEZ) of national jurisdiction (to 200 nautical miles).  However, these mechanisms are not applicable to areas beyond national jurisdiction, and the legal group of the Alliance worked with the knowledge that its findings would likely be relevant not only to the Sargasso Sea but to other ocean areas beyond national jurisdiction (“high seas”).   High seas represent approximately half of the total expanse of oceans worldwide.

Input from many sources was incorporated into a range of possible protection strategies and mechanisms.  After much consideration and debate, including intergovernmental meetings and liaison with a wide range of interested parties, it was decided that stewardship via a non-binding legal declaration by interested parties was best suited to the circumstances.  Case studies for other successful protected areas suggest that multi-party declarations can productively evolve into more rigorous mechanisms, such as treaties, as the parties progress in their stewardship experience.

With adoption of the Hamilton declaration on March 11, 2014 calls for the creation of a commission to oversea stewardship for the Sargasso Sea.  Signatories also expect to encourage other interested nations to join the coalition.  It is also expected that learnings from the work of the Alliance will be shared with other organizations seeking to enhance stewardship of world oceans.

Great stewardship is closely linked to respect and appreciation, and these in turn are greatly influenced by education, familiarity and understanding.  The distant nature of high seas for most of humankind creates a challenge in this respect.  To help address this I made a short film about the Sargasso Sea story to audiences who will hopefully share our commitment to enhanced stewardship despite having little direct contact with this vast and unique ecosystem in the North Atlantic ocean.   With the declaration now adopted by a first round of signatories, the Alliance will begin the process implementing a stewardship system and will seek to expand the support group to include other nations.  I had the opportunity to meet with senior policymakers in Cuba recently and many other meetings are planned.